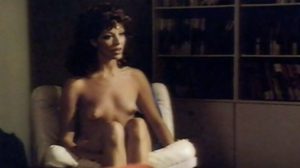 A ferocious serial killer kills pregnant women. It’s vital to stop him before he continues his merciless crusade. 5 donne per l’assassino is an interesting Italian thriller from the 70s, with a well-constructed plot and several nude actresses.
The first nude is of a young Ilona Staller, here still far from fame in porn with the stage name Cicciolina. In this film, she’s credited as Elena Mercuri.
Gabriella Lepori is the actress who strips the most in this film, and we are particularly happy. The last nude actress of the film is Pascale Rivault, but we also point out a very quick nude by Catherine Diamant, who plays a victim of the serial killer.