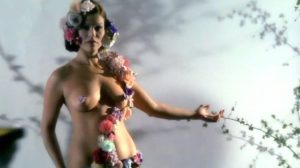 Federico leads a double life. One day, while he is at the stadium with his lover, he is caught on television and his secret is revealed.
Rosa Valenty is the first nude actress in the film. Maybe naked she is is not the right word, but this beautiful blonde actress is wearing fully transparent pink lingerie. Later, Mirta Miller takes off her clothes for a very hot photoshoot. Still excited by the first, a few minutes later comes the second photoshoot, even longer and more exciting.
Soon after, Mirta Miller is naked in the shower, with a man.
The last two hot sequences still involve Mirta Miller and Rosa Valenty.