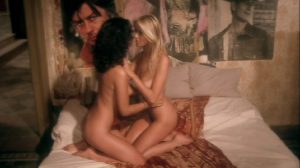 Being Twenty (original title Avere vent’anni) dues its title to the book Aden Arabia by Paul Nizan and tells the story of two girls, Gloria Guida and Lilli Carati, that decides to live in a complete freedom. This movie, despite showing miles and miles of nude skin, has also a good story. Almost the whole movie has a comedy tone but the first ending they made was terrible and bloody. The public was shocked and the movie disappeared from cinemas in a while. Then it appeared again with a new and happy end.
In 2019 a Bluray version of the official version of the film was created, that is, the one with the editing for the cinema and the cheerful ending. Unfortunately, from the HD version, a couple of sequences are missing from the original edition: the tragic ending, of course, and a short lesbian sequence between Lilli Carati and Gloria Guida.