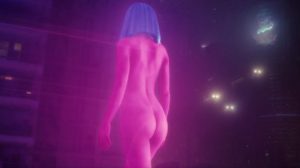 The sequel of the cult movie Blade Runner. Agent K is a blade runner of the Los Angeles police, in the year 2049. The replicants are outlawed, but the industries of Niander Wallace have created new replicants that have convinced the world: perfect, immortal, and obedient.
Until K discovers something during his investigations that could change all the knowledge about the replicants. He will be forced to abandon his gun and badge and get on the trail of Rick Deckard, who has been missing for thirty years.
There’s also room for nude actresses in this fabulous sci-fi movie. Ana de Armas fascinates us with a futuristic and interactive promotional board. And then there are Sallie Harmsen and Mackenzie Davis.