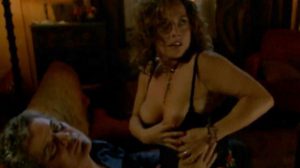 Bliss is a television series that explores women’s erotic desires. Each episode tells a different story.
In the first episode, Torri Higginson manages to have sex with her husband during a conjugal visit to the prison. Michelle Duquet plunges into the bathtub with a man in the second episode. A moment later the two are engaged in sex.
Jenny Levine is the star of the third episode. This blond bombshell undresses in front of a mirror to arouse her man.
In episode four we get to admire Tara Spencer-Nairn‘s ass. Episode five features two nude actresses, Mikela J. Mikael and Veronica Hurnick. The seventh episode also excites us with a couple of actresses: Michelle Lipper and Paule Ducharme. In the seventh episode, Gina Wilkinson excites us with a very hot striptease. Victoria Sanchez performs the last sex scene of the season.