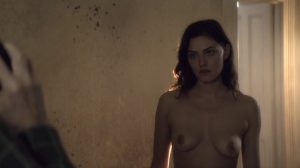 It’s been a year since a flood devastated an idyllic country town and killed five people. Now in this city has appeared a new and mysterious plant that has a magical capacity: restores youth! Women come back young and youth brings back some sexual appetites… Phoebe Tonkin and Nikki Shiels are the two actresses who take off their clothes in front of the camera in this first season of Bloom and we hope they are the first of a long series.