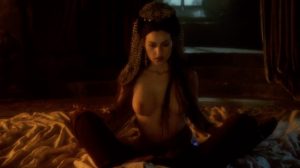 Francis Ford Coppola’s Dracula (AKA Bram Stoker’s Dracula) completely renewed the vampire-like genre. A $40 million production and a top-notch cast. In short: a masterpiece.
But the Dracula shot by Coppola is also synonymous of beautiful actresses. Better, nude actresses.
First of all Monica Bellucci, in the role of one of Dracula‘s wives. Florina Kendrick and Michaela Bercu are the other two wives. Three wives: a difficult life. Plus, Sadie Frost and Winona Ryder, for a feast of beautiful women.