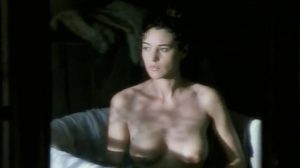 Briganti was presented in competition in Venice in 1993, and never released in the cinema. The film tells a story set in the Kingdom of the Two Sicilies, which involves brigands and soldiers. There is also a love story and it is the part that interests us most because the protagonist’s love is for Monica Bellucci. And we love her too. Monica undresses in some scenes and we are delighted to admire her naked while she bathes in a tub, while she sleeps, or during a sex scene.