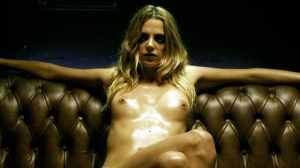 In an attempt to gain the trust of his mother, a young cheater tries to open a brothel with the help of a couple of rather stupid friends. Given the premises, accomplishing this task will not be very simple.
Neon Flesh – whose original title is Carne de neón – is a very interesting Spanish thriller, especially for the amount of nude Spanish actresses. The list is long: Ágatha Fresco, Andrea Carballo, Blanca Suárez, Florencia Limonoff, Hsin-Lan Chang, Macarena Gómez, Maria Zamarbide and Vanessa Oliveira.
Macarena Gómez offers us some of the most interesting sequences, including a simulated blowjob and a scene in which her body is completely sprinkled with oil.