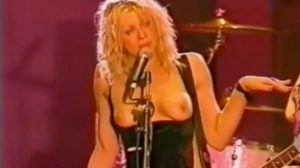 The Hole was an alternative rock band active from the late 1980s until the early 2000s. On vocals was Courtney Love, actress, singer, and widow of Kurt Cobain. Among our favorite performances is a concert in Sydney in 1999. While singing Celebrity Skin, Courtney Love pulls down her shirt and shows her boobs to the audience. Almost three minutes topless.