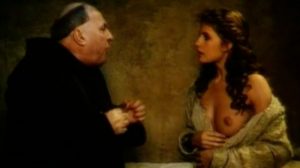 Le bon roi Dagobert (Good King Dagobert) is an Italian-French production from the first half of the 1980s. Dino Risi is directing this film with a very rich cast of interesting actors.
We are in France, in the sixth century AD. King Dagobert decides to go to Rome to be forgiven by the Pope for all his sins. It is not easy to resist temptation when he is surrounded by so many beauties.
Isabella Ferrari, very young and beautiful, shows her tits to the King, the priest, and the public. The other boobs are those of Moana Pozzi, Claudia Cavalcanti, Isabella Dandolo and Sabrina Siani. Carole Bouquet and Geretta Geretta show us their ass instead.