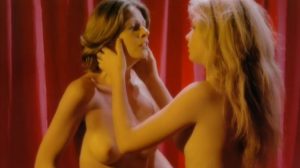 An impotent man with obvious mental disorders kills a woman after yet another sexual failure. The police arrest him. There is overwhelming evidence, but while he’s in jail other women die and the murderer’s modus operandi is the same…
Let’s talk about the nude scenes of Delirio Caldo, which are played by various actresses. First of all, the amazing Rita Calderoni. She’s an actress who played over thirty films between the 60s and the 80s after playing for several years on a women’s basketball team.
Rita Calderoni nude is beautiful and gives us a couple of really very interesting sequences, including a foursome that becomes a lesbian scene with Christa Barrymore and Cristina Perrier.
And then there are Katia Cardinali and Stefania Fassio as the victims.