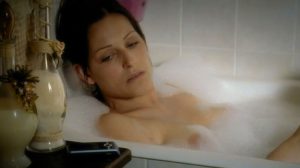 Distretto di polizia is one of the longest-running Italian television series. It tells the story of a Roman police station.
In this tenth season Claudia Pandolfi returns, who had left the series in the fifth season (but with participation also in the sixth). Unfortunately, Claudia doesn’t give us any particular sequences, apart from a sapphic kiss with the sensual Lucilla Agosti.
A nude scene is offered to us by Antonella Bavaro, in the bathtub. Lucilla Agosti, the protagonist of most of this season’s hot scenes, also offers us a nude in the bathtub.