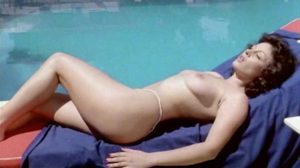 Seductive Simona (Paola Senatore) hires a couple of detectives to find out if her husband is cheating on her. The two settle in the couple’s home, one in the role of a homosexual butler, the other disguised as a curvy cook.
It’s not easy for the detective to play the role of the gay, since the house is full of sex bombs, starting with Simona, who never misses an opportunity to show herself naked. Besides her, there are two super sexy maids, played by Angie Vibeker and Lory Del Santo, and Simona’s daughter, played by Sabrina Siani.
At the beginning of the film, there is also a beautiful and long sequence with Danila Trebbi naked.