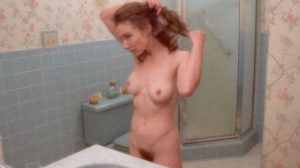 FleshEater is a low-cost horror movie with a classic zombie storyline. A Halloween night spent in the countryside by a group of horny youngsters turns into a nightmare. A lot of blood, but also naked actresses.
Denise Morrone and her boyfriend having sex in a barn in the film’s first hot scene. A living dead interrupts the performance. Twenty minutes later, Susan Marie Spier reveals a full nude body while taking a shower. Unfortunately, she too falls victim to the undead, becoming a walking corpse herself. A naked zombie!
After a costume party, Adena Dodds and her boyfriend go to a stable to make out, but the usual undead breaks in and ruins everything.