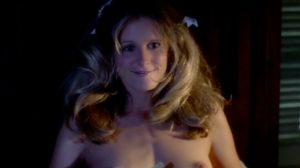 Michael Myers kills his sister on the night of Halloween in 1963. Fifteen years later, he escapes from the asylum where he had been interned and begins the Halloween saga.
The inhabitants of Haddonfield will not sleep peacefully, because Michael has not lost the habit of killing people. A film made with a budget of $325,000 that collected $47 million in America. And that began a long saga.
Why are we talking about it? Obviously because there are naked actresses: P.J. Soles and Sandy Johnson.