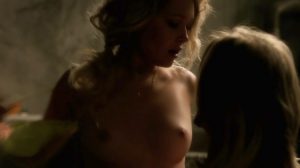 Heels is a television series that takes us into the world of wrestling. The protagonists are two wrestling brothers from DWL, a small independent wrestling federation. The two men inherited the federation from their father, who died in dramatic circumstances.
We prefer sexual encounters to wrestling matches, and the series gives us several nude actresses and interesting sequences.
Kelli Berglund fans will be delighted to enjoy new nude scenes with this fabulous actress. Kelli is engaged in some very intriguing sex scenes. Besides her, sex scenes also for Alison Luff, Elizabeth Posey, and Sumi Yu. Plus, Erin Ownbey at the pole dance pole.