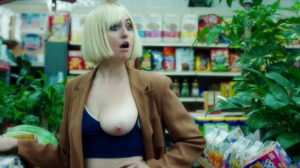 There were nude scenes in the first season, there were nude scenes in the second season… and there are nude scenes also in the third season of High Maintenance. The series tells the lives of several individuals who have one thing in common: their weed deliveryman.
This season, we can admire Nyseli Vega while showing a tit to her friends at the park, Catherine Cohen showing her boobs to everyone who rings at the door (and not just them), Asian actress Hye Yun Park naked and tied on the bed and finally Jenn Harris in a nice sequence of sex with a man.