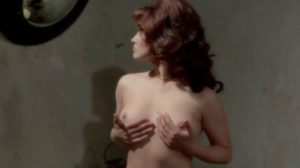 I giochi proibiti dell’Aretino Pietro (Tales of Erotica) is a classic Italian decamerotic from 1972, directed by Piero Regnoli. Four defendants are before a court and for each of them, we see an episode of the film, with all the typical ingredients of this type of comedy.
The first nude is by Angela Covello. She plays Tessa, a girl forced to become a nun but would prefer male attention.
The second episode opens with Shirley Corrigan naked, in the bathtub. The sexy blonde Shirley plays a woman not satisfied with her husband and once she gets out of the bathtub, we can witness her extramarital affairs. Under the same roof lives the maid Lisa (Orchidea De Santis), who shares the same passions as the mistress and gives us a couple of very intriguing nudes.
In the third episode, titled “4 Wives,” there are four nude actresses: Femi Benussi, Enza Sbordone, Marlene Rahn, and Isabelle Marchall.
Rosemarie Lindt attempts to solve a major problem in the fourth and final episode: the chastity belt her husband made her wear.