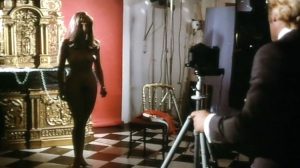 A girl commits suicide. The last guy she was with gets depressed and a doctor tries to help him, as maybe it’s not really a suicide.
Based on a novel by Scerbanenco, Safety Catch (the original title is Cran d’arrêt) is the only opportunity to admire Raffaella Carrà nude. A young Raffaella takes off her clothes in front of the cameras, showing a full-frontal nude covered only by the absence of lights. With a slight brightness work, we can see much more.
Raffaella Carrà shows us other very interesting sexy sequences, including a sadomasochistic photoshoot, wrapped in chains. Marianne Comtell is the other nude actress in the film.