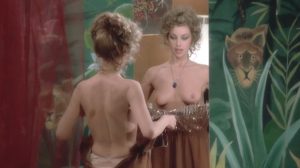 An investigation turns out to be much more complicated than expected for a private detective. His girlfriend, a shrewd and intelligent woman, assists him.
Sydne Rome starts off the hot scenes. While she’s dressing, the camera approaches her. She is topless, wearing suspenders and stockings. In the following scene, Mylène Demongeot is lying topless in bed with a man next to her. Let’s go back to Sydne Rome, who is coming out of the bathtub and showing us a perfect and inviting ass. While she is wearing a bathrobe, we can see a frontal nude for a moment.
In the last nude scene of the film, Karin Albin is performing on the stage of a nightclub. She is wearing just a pair of black panties and stockings. The panties slip off quickly.