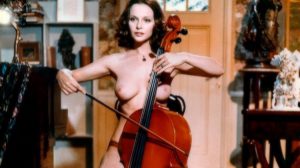 Nobody seems to remember the cello player Niccolò Vivaldi, interpreted by the mythical actor Lando Buzzanca, but all remember his beautiful wife, interpreted by the nerver forgotten Laura Antonelli. All envy his beautiful wife and he is proud of this. So he starts making nude pics of her, and showing them to the collegues. Then he is involved in an exhibitionist mania, spying her after she’s obliged to strip in front of the doctor, the masseur, at the spa… until the climax, when he makes her stripping on the stage of Arena Theater in Verona, during the opera “Aida”. Il merlo maschio is a cult movie that shows Laura Antonelli, nude and sexy, in one of her most exciting movie. Unfortunately the quality isn’t high, because the original film was destroyed by mistake.