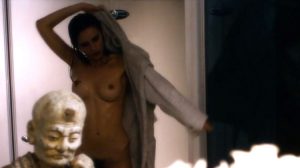 Four inmates – three men and a woman – are on 48-hour premium leave. All four have two days to enjoy a bit of freedom and put their lives in order before returning to prison. Someone will use these hours in the best way, others will get lost.
Rossana (Valentina Bellè) will use the time to make up with her mother, but also to have a good fuck. Of the four parallel stories, the one we followed with the most interest is precisely that of Valentina Bellè, who first has sex in a car, then takes a shower and shows us a breathtaking full-frontal nude.
Other nude actresses in the film are Alice Pagani and Luisa Paradiso.