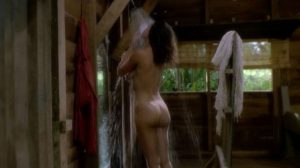 After the great success of Cannibal Holocaust, the producer Alessandro Fracassi wanted to repeat the success and this film is made. Initially, the direction was to be by Wes Craven.
A journalist and a cameraman head to Guayana to retrieve the son of a TV manager and interview a former colonel who fights drug trafficking.
There is no shortage of typical ingredients of Ruggero Deodato: dismemberments, beheadings, and various deaths. Fortunately for us, Valentina Forte is naked in a couple of sequences.