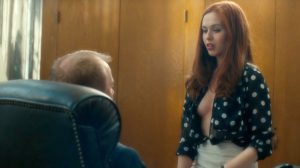 Parnell Harris is a corrupt judge. When his son attempts suicide and ends up in a coma, the man has a nervous breakdown and convinces himself that he’s listening to the voice of God. A voice that forces him to become a kind of vengeful vigilante.
Hand of God is an interesting TV series presented by Amazon Prime in 2014, which also shows us some naked actresses.
In the first episode, Elizabeth McLaughlin unbuttons her blouse and turns us on quite a bit, but she doesn’t show us her boobs. Fortunately, ten minutes later we can admire Emayatzy E. Corinealdi‘s boobs in a nice sex scene. After the performance, Emayatzy gets dressed and shows us her round, inviting ass.
In the second episode, Elizabeth McLaughlin has sex on a piano. For a couple of episodes, we are left high and dry, then Emayatzy E. Corinealdi delights us with a swim in the pool, topless, in episode five. At the beginning of the following episode, Dana Delany has a sexy sequence, in black lingerie. In the seventh episode, Alona Tal undresses, for a sex scene in bed.
In the eighth episode, Dana Delany is naked under the covers. When she gets up, the camera captures her ass. In the same episode, Emayatzy E. Corinealdi stars in the last sex scene of the season.