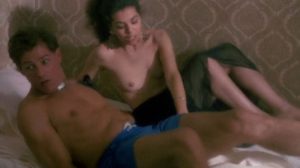 In Beirut, a man dies in the explosion of his car. His twin brother begins to investigate to discover the truth behind this death.
At the beginning of the film, Rahely Chimeyan undresses to have sex with a man, but they are interrupted by some men who burst into the room. Fifty-seven minutes later we can see Jennifer Runyon naked. This is the only nude scene performed by this charming actress who has made many of us fall in love.