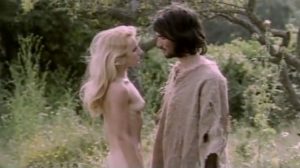 The long full title of this film is L’Aretino nei suoi ragionamenti sulle cortigiane, le maritate e… i cornuti contenti. It is a rare Italian decamerotic from 1972. Mother Violante has four daughters and for each of them, the film presents an episode.
Franca Gonella strips first alone, then in the company of the intriguing Karin Well. Giuliana Giuliani rides her companion until he is exhausted. Fiorella Masselli and Marisa Traversi compete for a handsome young man.
In the film, there are also some actresses who later disappeared from the scene, such as Joyce Geraldine Stewart and Claudia Magli. A real shame: they both have fabulous bodies. Joyce Geraldine Stewart is the actress who strips the most in this film.