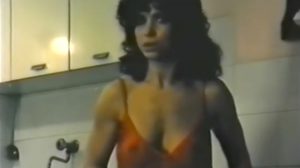 L’inceneritore is a very rare surreal film from the early 80s, written and directed by Pier Francesco Boscaro Dagli Ambrosi. The only film made by the director was presented at the 41st Venice Film Festival but never came out in theaters. Various genres are mixed in the film, from science fiction to thriller. In the sky of Padua float the poisonous miasmas of an incinerator, which drives people crazy.
The actors are almost all unknown, but among the few known names, we can admire the beautiful Ida Di Benedetto, who gives us a couple of sexy sequences and shows us her tits.