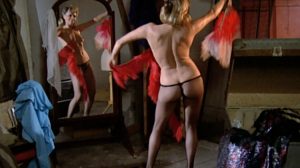 Daniela Giordano plays a sexy maid in this film that reminds us a bit of Malizia. The maid walks around the house in skimpy clothes, and the landlord and his son both fall in love with her.
Daniela Giordano shows her ass to the camera even before the opening credits, reassuring us of the amount of bare skin we’ll see in the film. In fact, soon afterward we find her crouched on the floor filling wine bottles, her legs spread and her blouse low-cut, without a bra.
Later, we watch a sex scene with Pina Pietronigro, a little-known actress. A few sequences with Daniela Giordano naked follow. The actress undresses and the hosts spy on her through mirrors or keyhole. In one of these sequences, we can also admire Annamaria Tornello, who wears a transparent bra. Speaking of transparency, Anna Melita wears a transparent shirt in one of the following scenes.
Twelve minutes later, Daniela Giordano has sex with a man, in bed, and Carla Calò arouses one of the protagonists with black hold-up stockings. On the same night, Anna Melita shows us breasts and a perfect ass while lying in bed.
The nude actresses are not finished. In a very beautiful scene, Daniela Giordano wears the lingerie of a nightclub dancer and dances in front of a mirror. In an alternating montage, we can see her and Rosemarie Lindt, both naked, dancing in front of the same mirror. Rosemarie Lindt naked, dancing with only her fishnet tights on, is totally arousing. The last nude scene in the film is performed by Anna Melita, who gives us a full-frontal nude.