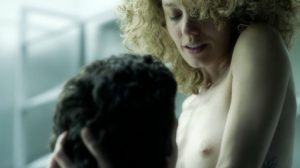 A man, known as “The Professor”, has an ambitious plan: to enter the “Fábrica Nacional de Moneda y Timbre” in Madrid, have thousands of millions of banknotes printed, and then run away with the loot. Money Heist (La casa de papel) is a Spanish television series that has had a huge international success. First presented by the Spanish channel Antena 3, then bought by Netflix.
To our delight, there are also some nude sequences. Clara Alvarado performs a striptease to distract a man. Esther Acebo is engaged in a couple of sex scenes. María Pedraza shows us a tit.
There is also a sexy scene with the beautiful Úrsula Corberó. This sexy actress doesn’t strip completely, but she’s wearing a pair of panties that allow us to admire her perfect ass.