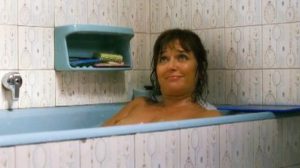 Naples, 1973. Peppino is a child who lives with his family and a somewhat strange cousin who is convinced he is Superman.
Unfortunately, this cousin dies, but Peppino continues to imagine his presence. His cousin becomes his imaginary friend and also his lifeline.
When Peppino’s mother goes into depression because she discovers that her husband is cheating on her, his imaginary friend will support him.
Cristiana Capotondi and Valeria Golino are the two actresses who show us the skin in this film, entitled La kryptonite nella borsa. Cristiana Capotondi shows us only a beautiful sequence in which she wears very horny tights. Valeria Golino shows us her tits, while she is lying in the bathtub looking at her husband’s penis, standing in front of her (her husband, not his penis).