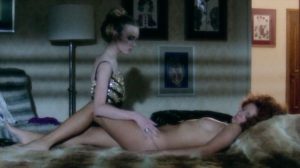 Madeleine (Camille Keaton) suffers from paranoid-schizophrenic hallucinations and is married. The woman meets a hippie and takes him home. She makes love to him while her husband spies on them. But when the husband’s son comes home, we discover that Madeleine is his secretary and not his wife. What is the truth?
The first hot scene is a beautiful full nude of Camille Keaton, taking off her bathrobe, in the pool, to show her partner that she is not wearing anything underneath her. The two take a bath, then sunbathe. Four minutes later, the two are in the house, making love. Ten minutes later, there is the third sex scene between the two, this time on a speedboat. Later, we admire Camille Keaton topless as she rides a horse. Halfway through the film, Paola Senatore arrives, making her debut with a super-sexy dance, with striptease included. Camille Keaton and Paola Senatore are involved in a soft lesbian sequence in which Camilla caresses Paola’s body.