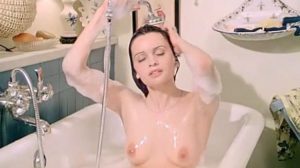 Marie-poupée is the story of a girl who looks much younger than her age. A rich store owner, a doll collector, notices her and falls in love with her. The two soon marry and the man makes her dress up as a doll. After 26 minutes Jeanne Goupil finally undresses and gives us a beautiful full-frontal nude. A very long scene in which we can admire the actress on the bed and in the bathtub.
Twelve minutes later Jeanne Goupil is still naked, lying on the bed. In a following scene, Jeanne Goupil is washing in the bathtub and Andréa Ferréol enters the tub with her. A couple more nude scenes close the film’s list of hot moments.