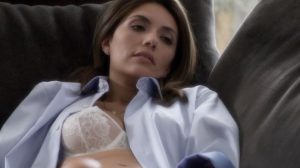 Serena Rossi plays social worker Mina Settembre, who tries to help anyone in need who asks for her help. Mina often seeks the support of her ex-husband, a magistrate.
In addition to a dozen well-written and well-acted episodes, this Italian television series features some interesting scenes with naked or provocative actresses.
In the first episode, Valentina D’Agostino is making love and is interrupted. We can admire her firm breasts. Later, we are delighted by Maria Vera Ratti with a transparent dressing gown. We have to wait until the end of episode six for a new nude scene, but it’s worth it. Serena Rossi gives us an interesting sex scene. In the seventh episode, Christiane Filangieri and Serena Rossi are engaged in two very intriguing sex scenes.
At the end of the ninth episode, Serena Rossi opens her shirt and shows us her perfect tits wrapped in lingerie. In the eleventh episode, Serena Rossi is lying on the sofa and wearing a transparent white bra. We see Serena Rossi in lingerie also in the twelfth episode, when she takes off her clothes and takes a bath in the sea in her underwear and bra.