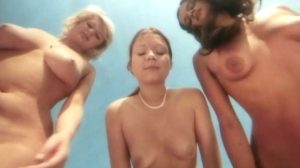 The original title is Krankenschwestern-Report, and it is one of a multitude of fake Schulmädchen-Report-style documentaries. In this case, it’s about nurses and their sexual adventures in the ward.
The film begins immediately with sex: nurse Iris Wobker is taking care of a patient. Naked, of course. Later, the nurse played by Ingrid Steeger tells us her story, which takes place in a meadow by the river. The actress gives us full-frontal nudity and a beautiful sex scene.
Next, Carmen Jäckel and Ulrike Butz are in the same bed, engaged in a lesbian scene. Dorothea Rau stars in the following scene. A moment later, the late Ulrike Butz has sex in a cornfield, and later she performs on a doctor’s couch. Meanwhile, Dorothea Rau slips completely naked into a patient’s bed to give him a night of love. Unfortunately, it’s the wrong patient, and the woman escapes from the covers.
Another nurse, another tale, another fuck. This time it’s Melitta Tegeler, a nurse who has sex with a doctor.
Dorothea Rau is very active in this film, and we find her in the following scene, intent on riding a man. After her, another queen of German sexploitation, Dorit Henke, undresses. In another scene, three nurses (Birgit Tetzlaff, Carmen Jäckel, and Dorothea Rau) are guests at the home of a doctor, who fantasizes about them and imagines them naked, by the pool, playing with him.
Doris Arden, Dorothea Rau, and Elisabeth Volkmann close the film with the last three intriguing nude scenes.