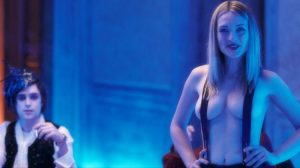 Parlami d’amore features Silvio Muccino in the dual roles of actor and director. Sasha is in love with Benedetta (Carolina Crescentini), but she doesn’t even consider him. He gets help from 40-year-old psychologist Nicole (Aitana Sánchez-Gijón), who fills him with helpful advice.
Carolina Crescentini is always beautiful, but in this film, she’s at the top. Beautiful, sensual, and exciting. The first time we see her naked, the main character is helping her undress to take a bath. In the following scene, the actress wears only a pair of suspenders to cover her breasts. Obviously, the coverage is very limited.
Another breathtaking scene: Carolina Crescentini plays the piano in black hold-ups, then seduces the main character. The following scene is tremendously exciting. Carolina Crescentini and the protagonist have sex outdoors. She’s sitting on a fountain, he moistens his fingers by putting them in her mouth, then lowers his hand between her legs. Then sex. Later, the two have sex again in a short, intense sequence.
The beautiful Aitana Sánchez-Gijón also gives us a long sex scene with the main character.