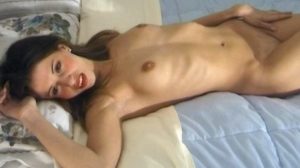 A director of auteur films decides to completely change his style after finding his wife in bed with another woman. He wants to abandon a certain cultured cinema and devote himself to the making of a trash film. Around him revolve three women: a young girl willing to do anything to have a part in a movie, one of her ex-girlfriends who runs a movie reviews magazine and a screenwriter who wants to work with him.
Rapporto di un regista su alcune giovani attrici is a film by Roger A. Fratter, one of the major representatives of Italian indie cinema and certainly one of our favorites, because his works are always very interesting and almost always full of nude actresses.
Inga Sempel, Jill Campbell and Roberta Sparta are the three beauties we can admire in some very intriguing scenes of this film. Three different women, all very beautiful and sensual.