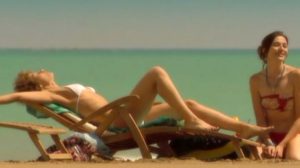 Veronica (Giovanna Di Rauso) is a young woman, and single, mother of a teenage son. It is night and the woman is driving when a car cuts her off and ends up in the sea. Veronica is frightened and instead of rendering aid, she runs away. The next day, she finds out on television that the man who was driving that car has been admitted to the hospital, in a coma. There is one thing Veronica doesn’t know: in the trunk of the ditched car, the police found a corpse missing some organs.
Interesting thriller, which gives us an intriguing sequence with topless Anna Foglietta and a beautiful scene with Giovanna Di Rauso and Anna Foglietta in bikinis.