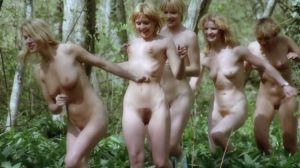 As in many films by the great Erwin C. Dietrich, even in Sechs Schwedinnen von der Tankstelle (the international title is High Test Girls), the plot is an excuse to show us many nude actresses and many sex scenes. In this film – which follows Sechs Schwedinnen im Pensionat – six beautiful Swedish girls inherit a gas station in Switzerland. To all their clients, the girls offer extra services.
Among the many interesting scenes, we point out France Lomay who gets masturbated by the guy inside the TV (!); an exercise bike with a dildo instead of a seat, on which Flore Sollier, France Lomay, Elsa Maroussia, Brigitte Lahaie, and Elodie Delage ride with joy; a run in the meadows with all six protagonists (the five already mentioned plus Nadine Pascal); the lesbian scene between Brigitte Lahaie and France Lomay.
The various sex scenes with the sexual Jane Baker are also unmissable.