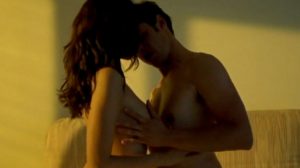 The vicissitudes of the deputy prosecutor Luca Bartoli continue. In the first season of Sospetti, Bartoli is involved in an investigation concerning the death of a colleague. In this second season, the man is again under indictment, this time on murder suspicion. There are also some nude actresses, for our happiness.
The first to undress is Antonia Liskova, naked in the shower, then in a chaste love scene. There are no other nude scenes in the first episode, but we report a sequence with Romina Mondello wearing a transparent white tank top. In the second episode, after 22 minutes Romina Mondello gives us a long and exciting sex scene. Half an hour later, the actress is engaged in a second sex scene.
No nudes in the next two episodes, while in the fifth we admire Antonia Liskova in a sexy bikini. The sixth and final episode begins with Antonia Liskova naked in the bathtub. The last hot scene is a rare nude of Silvie Pariset.