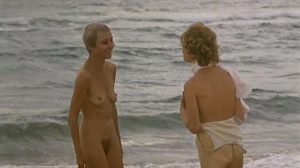 Piera has a mother with an uncomfortable mental condition, which gets worse year after year. His father also has problems and will spend time in the asylum.
The film Storia di Piera tells us about the life of this girl, from the homosexual relationship with Arianna to her work as a seamstress, up to her first successes in the theater. In fact, the film tells the life of the Italian actress Piera Degli Esposti and was taken from her autobiography.
Hanna Schygulla and Isabelle Huppert give us beautiful nude scenes, including full-frontal nudes.