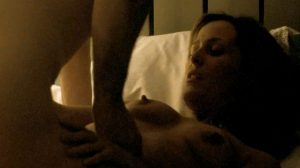 After surviving a very violent robbery, a businesswoman (Gillian Anderson) and her young boyfriend begin to plot revenge. The two, however, disagree on methods.
When watching The X-Files we were undecided about what excited us more: the mysterious theories about extraterrestrials or the sensual beauty of Agent Scully (Gillian Anderson). Today the answer is very clear to us: Gillian Anderson is one of the most exciting women to have appeared on the screen. And it seems incredible, but the passing years only make her more beautiful and sensual.
In an early scene of this film, someone spies Gillian Anderson undressing in her bedroom. The woman takes off her shirt and bra and shows us her breasts.
Later, Gillian Anderson has sex with a man in the woods at night. The actress does not undress but wears a super sexy dress, as well as being horny herself. A few minutes later we enjoy another sex scene. This time Gillian Anderson is in a bed, completely naked.