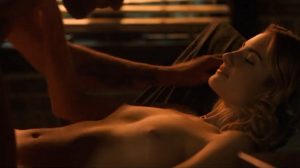 Tell Me Lies is a television series about a tumultuous but intoxicating love relationship. Stephen and Lucy (Grace Van Patten) meet in college and get engaged. Their relationship lasts eight years and will alter their lives and the lives of those around them.
It’s a series full of sequences we like, with beautiful nude actresses. In the second episode, Alicia Crowder has sex on the couch with a boy. Soon after, we can see Grace Van Patten naked in a long sex scene. The third episode begins with a sex scene: Grace Van Patten and the main character are fucking in bed. In the same episode, Sonia Mena and Alicia Crowder have doggy-style sex with their respective partners. More doggy-style fucking in episode 4. The actresses are Grace Van Patten and Catherine Missal. The latter gives us more interesting nudity during the episode.
Episode six begins with Alicia Crowder having sex with a boy. In episode seven, Catherine Missal‘s partner masturbates her on the bed.
In episode eight, Sonia Mena has sex with a boy. Later, we get turned on by a lesbian scene between Sonia Mena and Zoe Renee. In the same episode, Grace Van Patten has sex with her boyfriend. At the beginning of the ninth episode, Grace Van Patten‘s boyfriend gives her oral sex after a shower. A sexy scene with Lily McInerny in episode 10 closes the list of hot sequences in this first season.