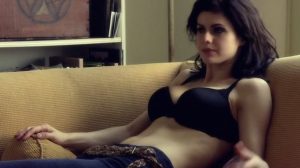 Texas Chainsaw 3D is a direct sequel to The Texas Chain Saw Massacre of 1974. In 1986 a direct sequel of the film was released, so the two sequels are incompatible with each other. Texas Chainsaw 3D was supposed to be the first of a new trilogy, but it was probably too ambitious and someone decided to turn it into a sequel. Who cares! We are only here for the two actresses in the film: Alexandra Daddario and Tania Raymonde. Few nudes, many sexy scenes, Daddario’s boobs bouncing under an open shirt … We would have liked more naked skin, but we can not complain.