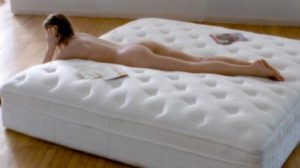 The Guitar tells a story that really starts badly. A woman is diagnosed with a deadly disease that leaves her a couple of months to live. Furthermore, her boyfriend abandons her and she’s fired from work.
With these premises, many people would decide to shorten the two months of life by jumping out of the window. This girl – played by Saffron Burrows – decides instead to put thrift aside and pursue her dreams. With nothing to lose, she will find that it’s easier to dive Still naked, she opens the door to the pizza girl. And she is still nude when she goes to open the boy who gives her the furniture, but covers herself with a transparent cloth before letting him in.
Among her adventures, there is also lesbian sex and threesomes. In both cases, the other woman is played by Paz de la Huerta.
There are really many interesting sequences in this film.