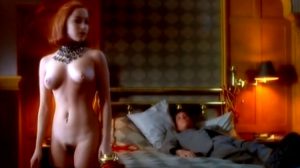 The Hunger is an horror genre television series, anthological, in which each episode is disconnected from the others. In the first season, Terence Stamp introduces the story before each episode.
The feature of this series is the huge amount of nude actresses. In almost every episode an actress strips and this makes The Hunger one of our favorite TV series ever.
The list of actresses who take off their clothes is really long, so we’ll write as few words as possible to go straight to the names: Amanda De Cadenet, Amanda Ryan, Audrey Benoit, Céline Bonnier, Clare Sims, Doris Milmore, Gregoriane Minot Payeur, Ilona Elkin, Janine Theriault, Jayne Heitmeyer, Karen Elkin, Kim Feeney, Lena Blackburn, Lena Headey, Liliana Komorowska, Lisa Bronwyn Moore, Marie-Josée Croze, Marni Thompson, Sally Kirkland and Sofia Shinas.