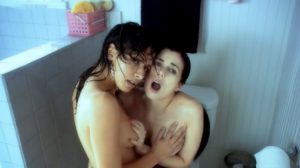 The first season of The L Word gave us many nude actresses. And given the subject matter, homosexuality, it also offered several lesbian scenes. The second season continues to give us great satisfaction. Some actresses are gone and others have arrived, such as the fabulous Sarah Shahi.
The complete list of nude actresses is this: Erin Daniels, Jennifer Beals, Katherine Moennig, Kelly Lynch, Laurel Holloman, Leisha Hailey, Mia Kirshner, Rachel Shelley, and Sarah Shahi.
Among the many sequences, the lesbian scene between Jennifer Beals and Laurel Holloman and the one between Sarah Shahi and Mia Kirshner are unmissable.