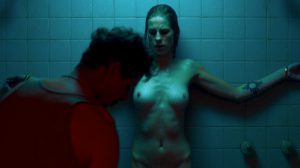 Too Old to Die Young is a television series written by director Nicolas Winding Refn with cartoonist Ed Brubaker. Detective Martin has seen his colleague die and now tries to atone for his feelings of guilt by becoming a sort of night executioner. On his way, he will find many strange and dangerous characters.
On our way, instead, we find some very beautiful nude actresses. Emily Seiler shows us a fabulous full frontal nude and her nude scenes are the most numerous in the first season of this television series. Jena Malone first masturbates on the bed then shaves her legs in the shower, obviously naked. Finally, there is Nell Tiger Free, who wears underpants and bra, but the bra is transparent.