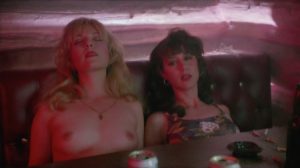 In the 1990s the whole world was fascinated by a television series made by the genius David Lynch. The title was Twin Peaks and there was a phrase echoing from millions of people’s televisions: “Who killed Laura Palmer?”
In 1992 the movie Twin Peaks: Fire Walk with Me is released. The film tells the last week of Laura Palmer’s life and the story of an FBI agent who disappears during the investigation of a murder case. A case that could be linked to the death of Laura Palmer.
Sheryl Lee, Anne Gaybis and Moira Kelly give us several interesting sequences. Especially the blonde and beautiful Sheryl Lee, who offers us a lot of nude scenes, one more intriguing than the other.