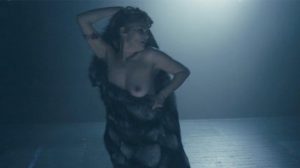 In 1969, came a film by Massimo Dallamano which told the story taken from a novel by Leopold von Sacher-Masoch entitled Venus in Fur. The main character was the lovely Laura Antonelli, an unforgettable icon of Italian cinema. Forty-five years later, another director works with this novel, though with a different story, putting in front of the camera another icon of cinema: Emmanuelle Seigner. This beautiful actress, who is also the wife of the film director Roman Polanski, after almost fifty years is still at the highest levels of sensuality.